Sometimes when I mention I work with Avon I get the response “Isn’t that a pyramid scheme?”

The answer is No. If it were, I’d probably be in jail, because pyramid schemes are ILLEGAL.

Avon is a multi-level marketing business (MLM). That’s not just a fancy change of words: it’s a whole different business model. Let’s look at both in turn.

We all know what a pyramid looks like, right?

Pyramid schemes usually start with one person at the pointy end. Let’s call him Barney.

Barney offers an opportunity to get rich quick. He interests people by claiming huge instant profits or by promising future income through their investment in a group that has interests close to their heart.

Barney recruits 10 people paying £200 each and earns the full amount from each of them. He may or may not invest that original “investment”.

Each of those 10 people then have to recruit 10 more in order to recoup their original investment. They receive far less than the full amount each recruits put in, because a large percentage goes to Barney for him to “invest”. Still, 50% of £2000 just for signing a few people in is great, huh?

Note: There is usually no physical product involved in these schemes, just the promise of wealth through connections or investments. So no way to make money other than buy bringing new people in to the business

So now there are 111 people in this business. Each of whom has to recruit another 10 in order to receive any payment. If any of the people they recruit drops out, they have to refill that hole. And so it goes on...

Every layer of this business increases tenfold until the market is saturated with nobody else wanting to join, nobody involved having the opportunity to create income by recruiting more, and -poof!- the whole scheme collapses.


The only people who make money from a pyramid scheme are those sitting right at the top who recruited those initial 10 from whom all income has flowed back. Usually by now they have vanished to a tax haven with no extradition process.

I found this description quite helpful:

So how does this differ from Multi-Level Marketing? Let's have a look.

First of all, MLMs are not a way to get rich quick. Yes they can provide fantastic payoffs and residual income, but you have to put the effort in! Nobody earns in an MLM unless products are sold. 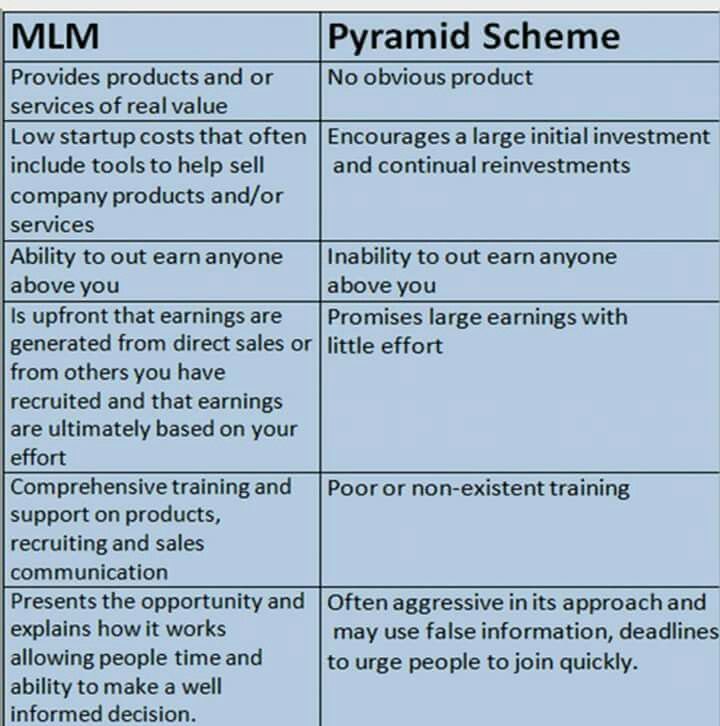 Image source: consumer,sd.gov
I hope this helps clarify the differences between a pyramid scheme and MLM. Avon works for people of all ages and all circumstances, right across the globe. Nobody is left financially ruined by an MLM such as Avon. If people don't succeed, they have either not tried the avenues available to them for promoting their businesses and the MLM products to the widest possible market, or sadly they may not have received adequate training from their team leader. This is why it is important to thoroughly research the team you are applying to, in order to ensure its working methods are a good fit for you.

Any questions? Comment below and I will do my best to answer them!
Helen xx